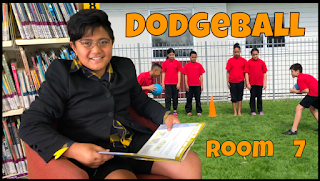 "Listen to a fantastic story told by Paschal about the great Pt England School Dodgeball tournament of 2018. One team will rise through the ranks to greatness."

Enjoy Room 7's entry into the 2018 Manaiakalani Film Festival. Please leave a comment if you enjoyed it.
Posted by Matt Goodwin at 09:00 215 comments:


When we arrived into the stadium I was feeling really nervous. As we were walking down the stairs, I saw the big field that we were going to play on. My heart was beating so fast, my legs were shaking and I was just so scared.


We finally made it to our seats after a long walk, and we had a great view of the women’s warriors team playing. Our girls team were so happy when we saw the women’s warriors because we saw women that we knew. I saw this one girl and I couldn’t believe my eyes she was a lady who used to play for my rugby club in the women's Marist rugby team. It was the end of the game and the ladies won 32 - 4.

Then we had to start getting ready, the under 13s had just finished playing their game and we started our warm up. We had to copy Roger and Johnny Tuivasa sheck. After that it was game time, the hooters went and the ref blew her whistle. The opposition kicked the ball towards us and it rolled towards me. I was supposed to give the ball and follow the plan but I heard my teacher say run Levonah run.

So I grabbed the ball and ran as fast as I could. First I ran into this little girl and bumped her off as hard as I could, then I stepped another girl and ran so fast like flash. I was so close to the try line and another girl tried to tackle me but I just kept pumping my legs like my coach taught me and I got the ball down onto the tryline. I was so happy because I’ve never ever played on the Mt smart stadium field before and It was a once in a lifetime opportunity so I had to get the try. 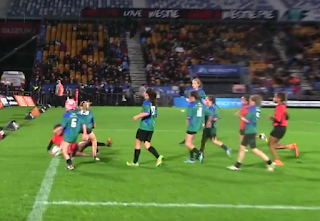 The game was nearly over and I really wanted my sister to get a try, so I helped her out and I told her to do our plan liked we practiced. The plan was that she would dummy it to the side that everyone was on and she would run it to the tryline. It was time that she was about to do it. Then she did it and she sprinted to the tryline and got the try. I was so proud because both of us each got a try. Then the hooter blew and it was time.

We were all so happy that we won, but we had to remember to stay humble. We did our cheers, shook hands with the other team and had a photo with them. We went back to our seats and we were talking about our amazing win. We ended up winning 24 - 0. 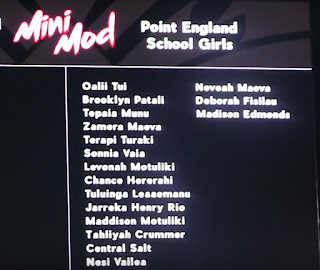 As we were ordering the food Shaun Johnson made the kick for his team. We all were eating and David Fusitu’a scored the next try right in front of us. We shouted “ David David” and he waved at us. The cook island drums were playing, so we went in front of it and started dancing. Mr Moran got out his phone and started recording us. Shaun also got his next kick.

The game was nearly finished and Adam Blair got the last try in between the gold post. We all went crazy, we even got a wave from Kalyn Ponga. The final score was 22 - 7.

Please check out our highlights movie!

Posted by Matt Goodwin at 12:29 No comments: 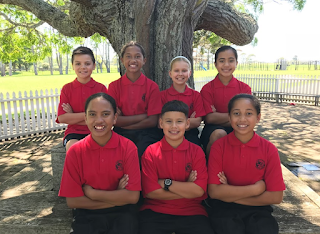 If you guys remembered I am an ambassador. We have been doing a great job, presenting to visitor that have been coming to our school. You should know that being an ambassador isn't easy.  Sometimes we have to be at school around that 8.30 mark ready to get in our uniform. After we get into our uniform we go to the Tusitala and have a little practice before all the visitors arrive. Sometime we even go to different university. The only university that we have been to this year is M.I.T (Manukau Institute of Technology). Each time we present to our visitors Mr
Somerville  looks at how well we present or remember our lines and by the next
day he chooses a player of the day. When we present to our visitors we present to many people from different country's. We've had visitors from the United States and even from Canada.


Here are some photos of the ambassadors presenting to some of our visitors!!
Posted by Matt Goodwin at 12:33 No comments: